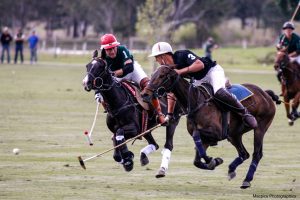 A QUICK GUIDE TO POLO

For those of you who need a little help understanding Polo, here are some interesting facts which will have you talking like a pro in no time.

Polo is played when two teams of four players, each handling a mallet “stick” seated on ponies line up parallel to each other in the centre of the field. Present are two mounted umpires and a referee on the field and a referee on the sideline. The umpire bowls the ball between the lines of players to start the game then by passing to team mates, speed and skill manoeuvring, each team attempts to score by knocking the ball between the opposite sides’ goal posts.

The flight of the ball is important, however, not as much as the players who test their ability and skill to control the ball while riding a horse at great speed. Watch the actions of the players carefully and you’ll soon be able to anticipate the next direction of play.

It is often said ‘you will know when you are watching good polo players. Watch out for “air shots” (picking up a pass in mid-air) or performing long downfield dribbles as both, as you can imagine, are difficult astride a horse moving at 35 miles an hour. Skilled players will also show great control of both the ball and of their horse-and the ability to hit a backhander (the near left side shot) is what distinguishes the master from the apprentice. Inexperienced polo players may also make mistakes such as frequently topping the ball or missing it altogether. Great polo players are also said to look graceful with masterful control of what they are doing and their mount. Watch carefully!

In polo there are several key equipment pieces that are vital to know.

Firstly the polo ball is made of plastic or bamboo root. It is 3 ¼ inches in diameter and weighs between 4 ¼ ounces and 4 ¾ ounces and can move at speeds in excess of 100 kilometres an hour.

Mallets or “sticks” are between 40 and 52 inches long and their length is determined by the height of the horse.

PONIES OR A HORSE?

The horses in Polo are referred to as ponies but many are thoroughbreds, not actually ponies. A polo mount averages 62 inches (or 155 hands) high. The qualities a player looks for in their mount are heart, speed, stamina, and the ability to accelerate at speed, stop and turn quickly plus a temperament suited to the game. Don’t think the brightly coloured leg wrappings just look good, they also serve as protection from stray mallet blows.

The playing field is 300 yards long and 160 yards wide with boundaries acting as the sidelines and backlines. Goal posts are spaced 24 feet apart and are 10 feet high. Sideboards are optional and are a nine to eleven inch board along the sidelines. When a ball crosses the sidelines, or goes over the sideboard, it is considered out of bounds and the umpire throws in another ball between the two teams. By the way, no time-out is allowed for an out-of-bounds ball.

POSITIONS ON THE FIELD

There are four team members in each team and their positions are all distinctly different. Players can change positions momentarily but will try and return to their initial position. So what do they each do?

UMPIRES AND A REFEREE!

There are two mounted umpires, one for each side of the field. The umpires consult each other after each infringement and impose a penalty only if they agree. If they don’t, they confer with the third man, the referee.

The game is separated into six “chukkas” each lasting 7 minutes. Between each chukka a player may change to a fresh horse.

This occurs at the beginning of a chukka, or when play resumes, with the umpire bowling the ball between the two ready teams.

With the speed and fury of the sport, players will often hinder or bump each other in an effort to win the ball. Players can in fact legally bump or hinder when: hooking the mallet of the player hitting the ball; riding into a player or “bumping” (providing the angle of impact is not excessively dangerous); gently riding next to a player and pushing them off course (excluding the elbow); and simply outrunning a player to the ball before the next shot.

Surprisingly, players avoid placing any fragile part of their body on path of the ball because it is not only hard, but is often travelling as quickly as 100miles per hour and the impact could be quite dangerous.

A point is scored when the ball goes between the uprights either on the ground or off the lines projected upward. Flagmen at each goal will wave the flag overhead, indicating a goal has been scored or below the waist, indicating no score. If the ball is in play when the signal sounds, 30 second overtime is added. Play continues until someone has scored, the ball goes out of bounds or until 30 seconds is over.

In the event of a tie score at the end of the final chukka, there will be a 5 minute intermission to allow the players to rest. Players may change to a fresh pony, before beginning a “sudden death” chukka – in which the first team to score wins.

A tradition of polo is inviting spectators on to the field at halftime between the third and fourth chukkas to stamp divots left by the horses’ hooves, this is really only a recreational tradition as most divots actually occur in front of the goals and most spectators stamp at mid-field. But you can’t beat a tradition!

The Hook: A player may spoil another’s shot by putting their mallet in the way of the striking player. A cross hook occurs when the player reaches over their opponent’s mount to attempt to hook; this is considered a foul.

The Knock In: Should a team in an offensive drive, hit the ball across the opponents back line, the defending team resumes the game with a free hit from their back line. No time is allowed for knock-ins.

The Tail shot: hitting the ball behind and across the horse’s rump.

When a penalty is awarded the awarded team will be able to take a free shot towards the goal from a set distance. The severity of the foul committed determines what penalty will be awarded – the range is from an automatic goal to a free hit 60 yards from the backline.

Ride-Off: This occurs when two riders make contact and attempt to push each other off the line of the ball so as to prevent the other from striking. The horses are the ones intended to do the pushing, although a player may use their body, not their elbows.

All registered Polo players are rated on a scale of -2 to 10. the higher the number the better. Although the word “goal” is often used after the digit, it bears no relation to the number of goals a player might score-only to the players ability. The team handicap is the sum total rating of the teams players and in handicap matches the team with the high handicap gives the difference in rating to the other team. So a 6 goal team will give 2 goals to a 4 goal team.